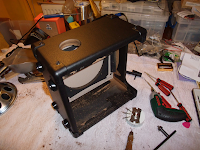 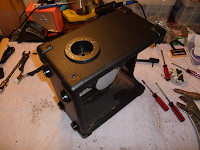 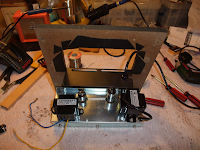 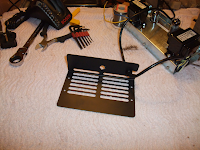 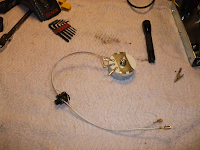 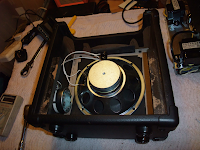 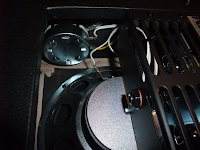 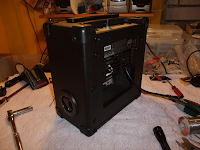 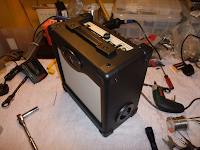 OK, so you'd not think that a 5W amp needs taming but nevertheless 5W is far too much to use at home given you want to wind it all the way up to get a reasonable degree of overdrive.

JayGee suggested I try an L-pad with it as he'd had success with one on his Mesa 5:25. So I bought a suitable one and mounting plate from Wilmslow Audio.

Waving the mounting plate at the cabinet suggested it'd fit tidily in the side so I stripped the guts out of the Peavey. You just need to undo the four screws at the back and the two that hold the handle on then the whole thing slides out. I also undid the speaker to avoid getting sawdust in it. The speaker really is nastily made, it may yet get upgraded with a Celestion Super 8.

The mounting plate was just the right size that my biggest holesaw would suit it nicely, I centred it by eye then got a passing JayGee to hold the cabinet while I attacked it with the drill.

Smell of burning MDF aside this was trivially easy and pretty soon I had the plate tidily mounted.

I figured I also wanted the option to drive an external speaker as experimenting with this had show it to be worthwhile. So while the guts were out I put a hole for a jack socket in the grille at the back of the amp.

Following the instructions that came with the L-pad I made a simple loom which would allow me to connect this up without modding the amp itself. The spade connectors normally connected to the speaker just push onto the L-pad instead.

After this is was simply a case of just bolting it all back together and connecting it up.

Now with the L-pad fitted you can wind the amp all the way up but turn the volume down until it's perfectly usable for neighbour friendly practice. It does a very nice 'dirty rock' sound and has transformed the amp from something I just wouldn't use into something I probably will. I reckon the L-pad does rob the amp of some treble but not enough that it's a problem, it was almost overly bright before.

The good thing about using the matching mounting plate for the L-pad is that it almost looks like it came this way from the factory. Only the white wires loosely routed in the back of the cabinet really give the game away.

Only time will tell if it'll supplant the Indie IT-30 I normally use for weekend practice sessions. Provided we're playing 'rock' and not 'metal' it should certainly manage it OK although I'd definitely be tempted to change the speaker.

It's currently lurking downstairs as my 'check things while fettling' amp and it works brilliantly for that.

Posting all this stuff on Facebook didn't really work and it seemed a bit ephemeral. Not that my blog is going to set the world afire and be talked about for centuries either.
I've got a load of stuff that I'm planning to backfill this blog with so don't be surprised if 'old' posts start appearing.

Amps, pedals and other gear